Often referred to as the gateway to Africa, Senegal is at the westernmost tip of the Africa, and is considered one of the most stable countries on the continent, with few political conflicts and a government that opens itself to democracy. Tourism is gradually developing and industry is growing, albeit slowly. The majority of Senegalese, however, still work under difficult conditions - mostly from fishing and agriculture. Throughout the country, the informal sector dominates the labour market.

Relatively dry, its shoreline runs along the Atlantic Ocean at the Sahel’s westernmost point. Up to half its population of 16,7 million is concentrated around Dakar and other urban areas.  Senegal has, in recent decades, seen rapid urbanisation. The proportion of the population living in urban areas is expected to increase to 46 per cent in 2020 and to 52 per cent in 2030. If these projections materialize, one out of every two Senegalese citizens will live in a town or city by 2030. The Ministry of Urban Renewal, Housing and Urban Development therefore decided to conduct overall studies as part of an ambitious national programme entitled “Cities without Slums in Senegal.” This programme is initiated in partnership with Cities Alliance, UN-Habitat and various institutional stakeholders in Senegal. Another programme entitled Urban Local Development Support Programme is being implemented in Senegal with contributions equivalent to 10.5 million US dollars from the European Union. 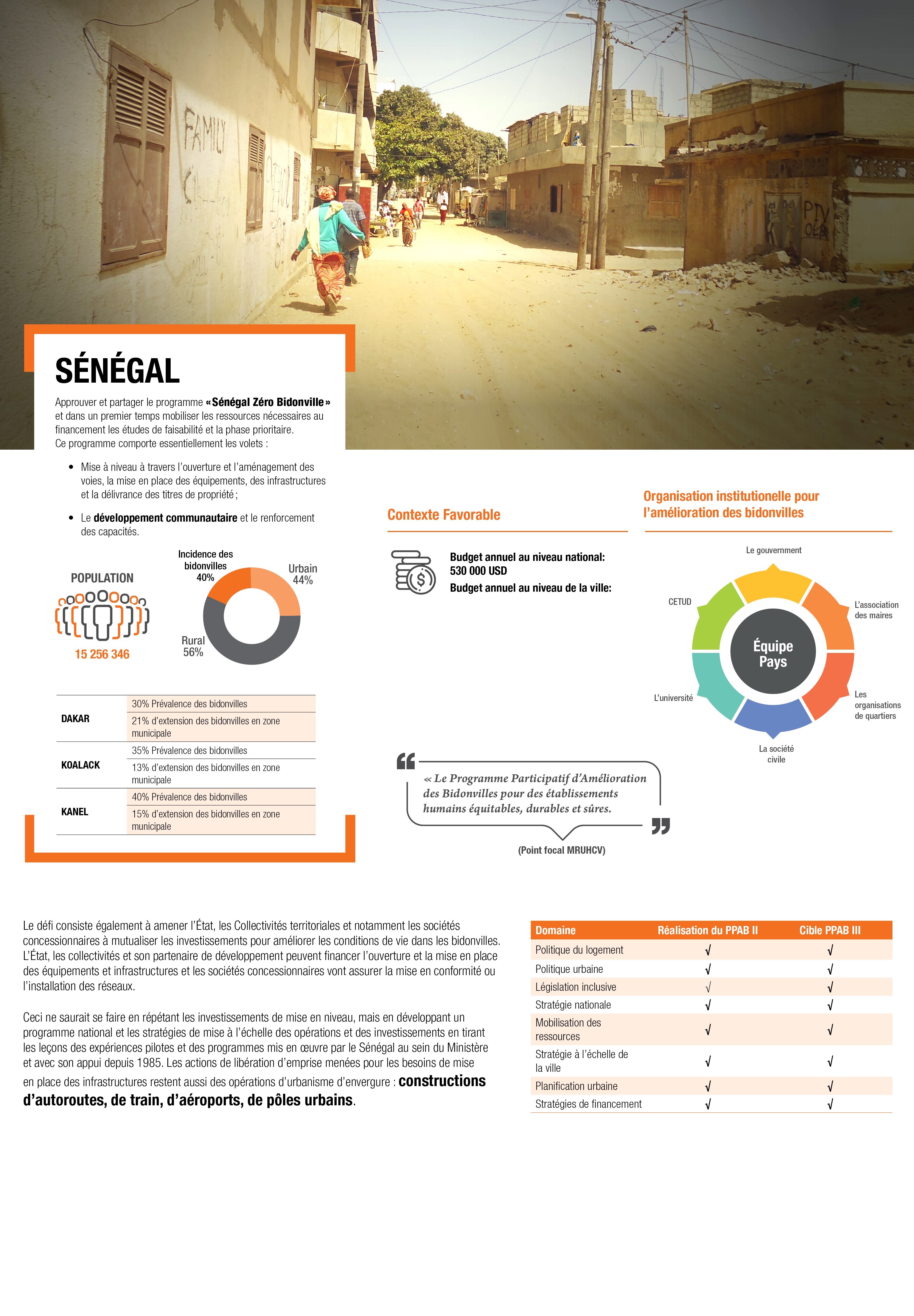 The PSUP in Senegal prioritised active community engagement as part of its methodology, resulting in improved collaboration between the local and national authorities and the community. Specific attention was given in PSUP Phase 3 to a sensible gender approach, designed to target women groups and youth involvement via youth associations across district development committees already set up in Grand Medine and Arafat, two city districts of Dakar. This is a methodological innovation compared to previous approaches of slum upgrading in Senegal that did not focus on women and youth.

Located in the municipalities of Grand-Yoff and Patte d’Oie respectively, the neighbourhoods of Arafat and Grand Medine were selected for implementation of Phase 3 with the active involvement of Dakar City and local authorities. More than 150,000 people live there. Recurring floods during the rainy season are common in the area, which lacks sanitation mechanisms and basic utilities. The PSUP Phase 3 pilot projects focuses on the guarantee of secure tenure and the provision of improved access to basic services and adequate infrastructure such as access roads and drainage. Opening up roads and the realignment of the urban design were other priorities in the projects. Around 50 houses will be impacted directly by operations and more than 1,000 inhabitants will benefit directly from the slum upgrading operations. In addition, initiatives will be carried out to set up the next steps for local economic development activities focusing on citizen engagement, youth employment, urban safety and security.