Papua New Guinea comprises both the mainland and some 600 smaller offshore islands and atolls. With a total land area of 470,000 square kilometres it belongs to one of the biggest island states in the world. Papua New Guinea occupies the eastern half of the West Pacific island, whereas the western side – West Papua – is part of Indonesia.

Papua New Guinea is remarkably diverse in geography and natural resources. Large regions of the entire main island are only sparsely developed. The island is crossed by a 200 km wide, branched mountain range, which is characterised by steep valleys and inaccessible plains. This is one reason why there is hardly any infrastructure inland. Only a few roads cross the country, and many villages cannot even be accessed properly. Most of the towns and cities are concentred in the coastal regions.

Papua New Guinea’s population is young and growing. But there are limited formal job opportunities for the increasing employment age population. Some 80 per cent of Papua New Guinea's people live in rural areas with few or no facilities of modern life.

The country has several urban centres. Most towns and cities are concentred in the coastal regions, with approximately 28 per cent of all urban residents living in the capital Port Moresby, on the South Western Coast. Papua New Guinea struggles to provide services to its citizens. Only 60 per cent of the people have access to adequate sanitation and safe drinking water.

With that being said, the government is taking action. In 2006, the new Office of Urbanisation started to establish a policy framework on urbanization and developed the first Urbanisation Policy 2010-2030 of the country. The policy aims at reducing urban poverty in unplanned settlements. 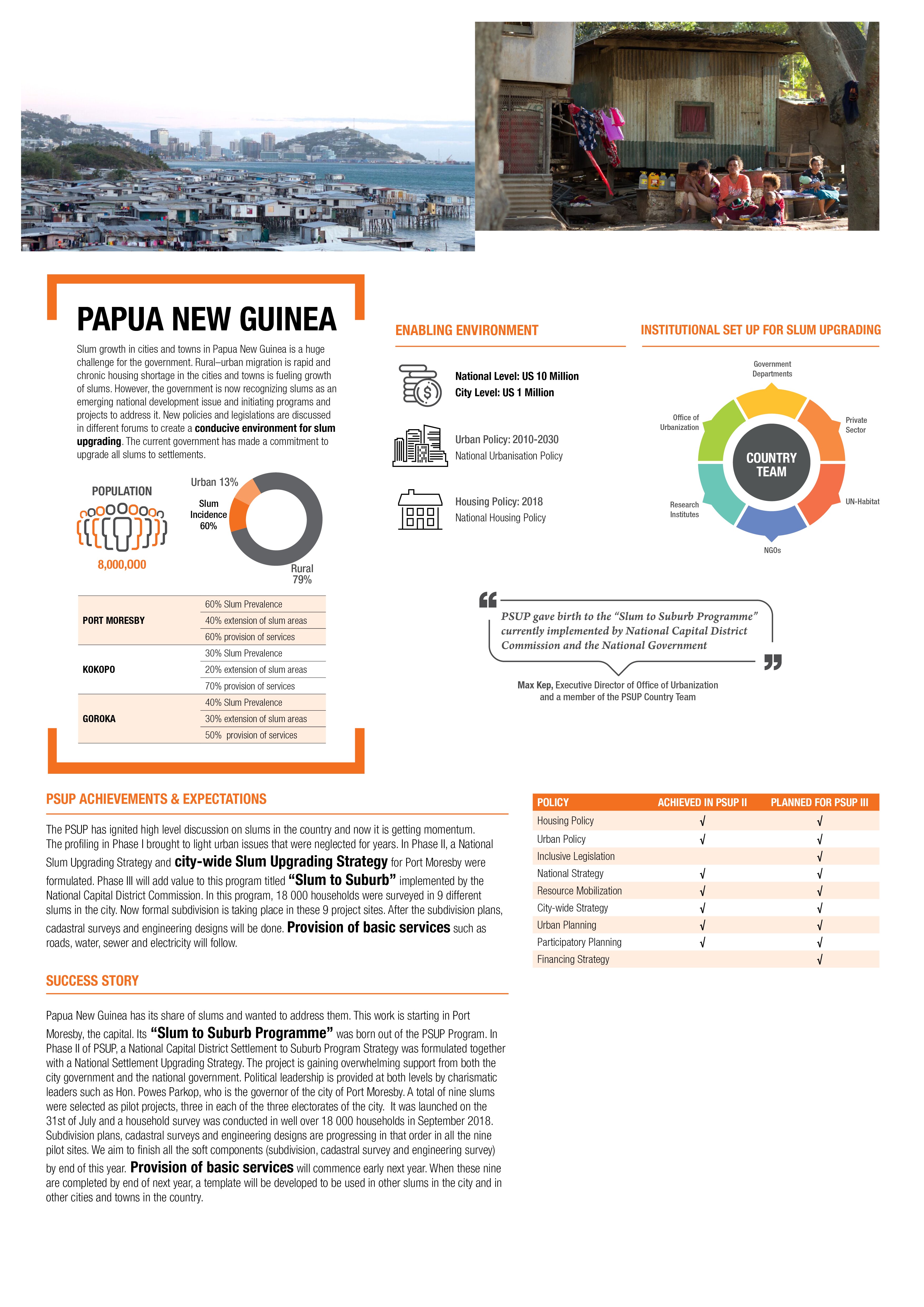 Through the PSUP, the partner ministry, the three participating urban councils and community members have been trained on participatory processes in decision making, urban assessment, results-based management, gender and youth in the city and the human rights-based approach. They have also been sensitised on planning, basic urban services, and housing and land issues in connection with slums in urban areas. The PSUP was influential in the shaping of urban interventions in the country. For example, the data collection and urban consultations held during Phase 1 of PSUP were essential for the formulation of the National Urbanisation Policy as well as for the first National Urban Forum in 2010. This forum further triggered the formation of a National Habitat Committee, which had its first meeting in April 2014 and is also serving as the PSUP steering committee, ensuring integration of slum upgrading and the PSUP principles into urban discussions and supplying feedback for the PSUP process. A further catalytic effect of PSUP was the establishment of a community group named Inclusive Development PNG Inc, which aims to build networks in the slum communities as well as bridging the gap between the slum communities and the urban authorities. The rich data collection and analysis of the PSUP at neighbourhood level and its policy review, combined with an urban program of Cities Alliance, led to the formulation of a National Slum Upgrading Strategy bringing the issue beyond the city into national attention. Papua New Guinea is implementing Phase 2 of the PSUP in partnership with the Office of Urbanisation in Port Moresby. Phase 1 was implemented as well in the cities of Goroka and Kokopo.