"Our village was facing chaos!"

On Kenya's coast, a pilot project is to transform two slum villages into sustainable communities.

by Kirsten Milhahn (Text and Photos)

"Someone has got to clear the mess," narrates Mwanatumu Omar, chuckling loudly as she energetically manoeuvres her wheelbarrow and gardening tools through the narrow alley between two mud huts. The last heavy downpour was just a few days ago. It flooded parts of the slum village and washed up a lot of rubbish from the dump down at the swamp. "If we do not collect the trash ourselves and carry it to the main road, nobody will pick it up." Using the rake, the heavyset Kenyan woman points towards the alley. No vehicle can get past the congested rows of huts, let alone a garbage truck.

Mwanatumu Omar is a member of the local Majengo garbage unit. The slum village lies on the outskirts of Mtwapa, north of Kenya's coastal city of Mombasa. Once a week, the 14 women and men walk through the village, armed with wheelbarrows and garbage cans and clean up. They sweep the narrow slum alleys, rake the open spaces between huts and clean the few roadside ditches. Like many other informal settlements, their locality is not connected to the public garbage disposal system. That's why the slum dwellers have lately taken it upon themselves. 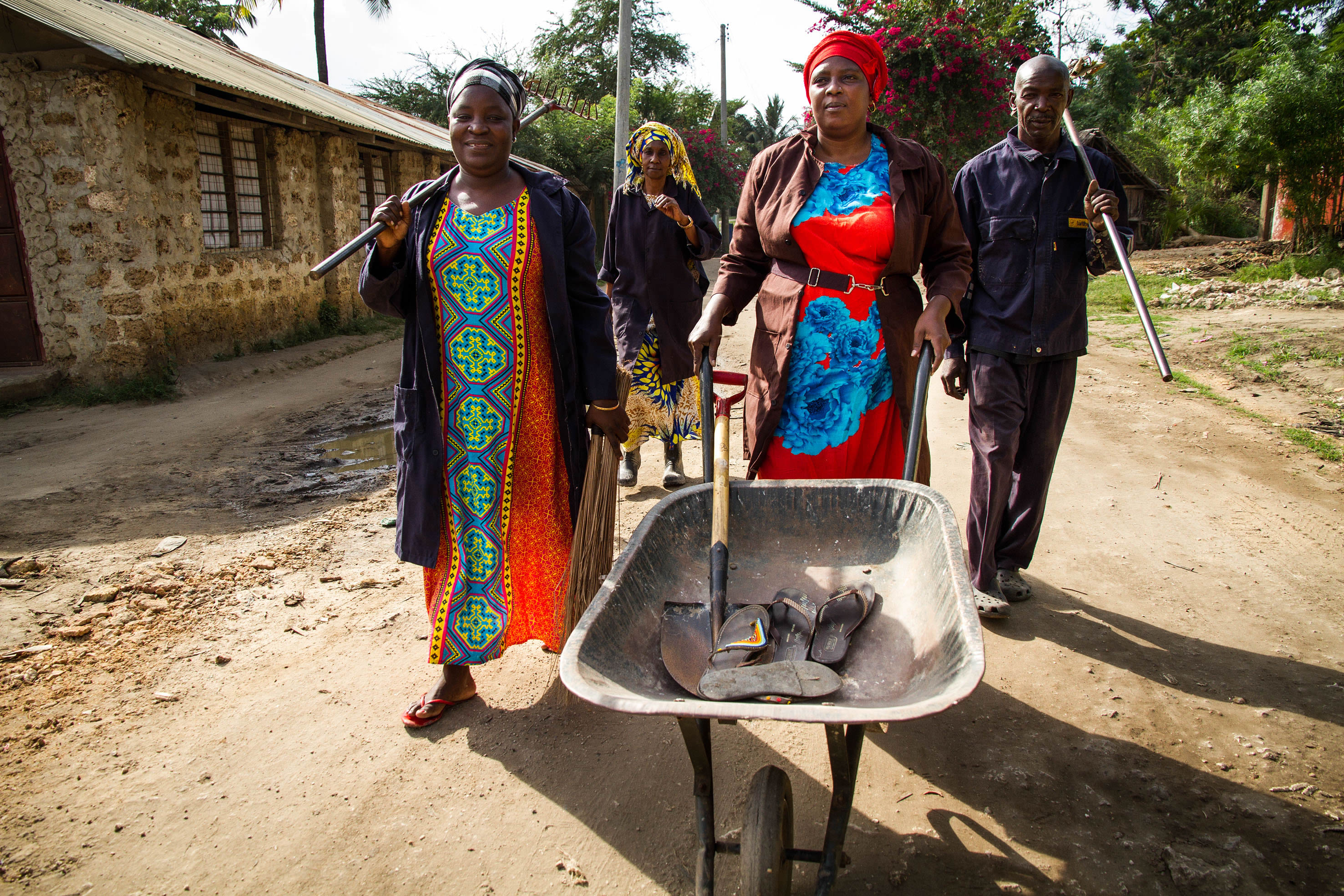 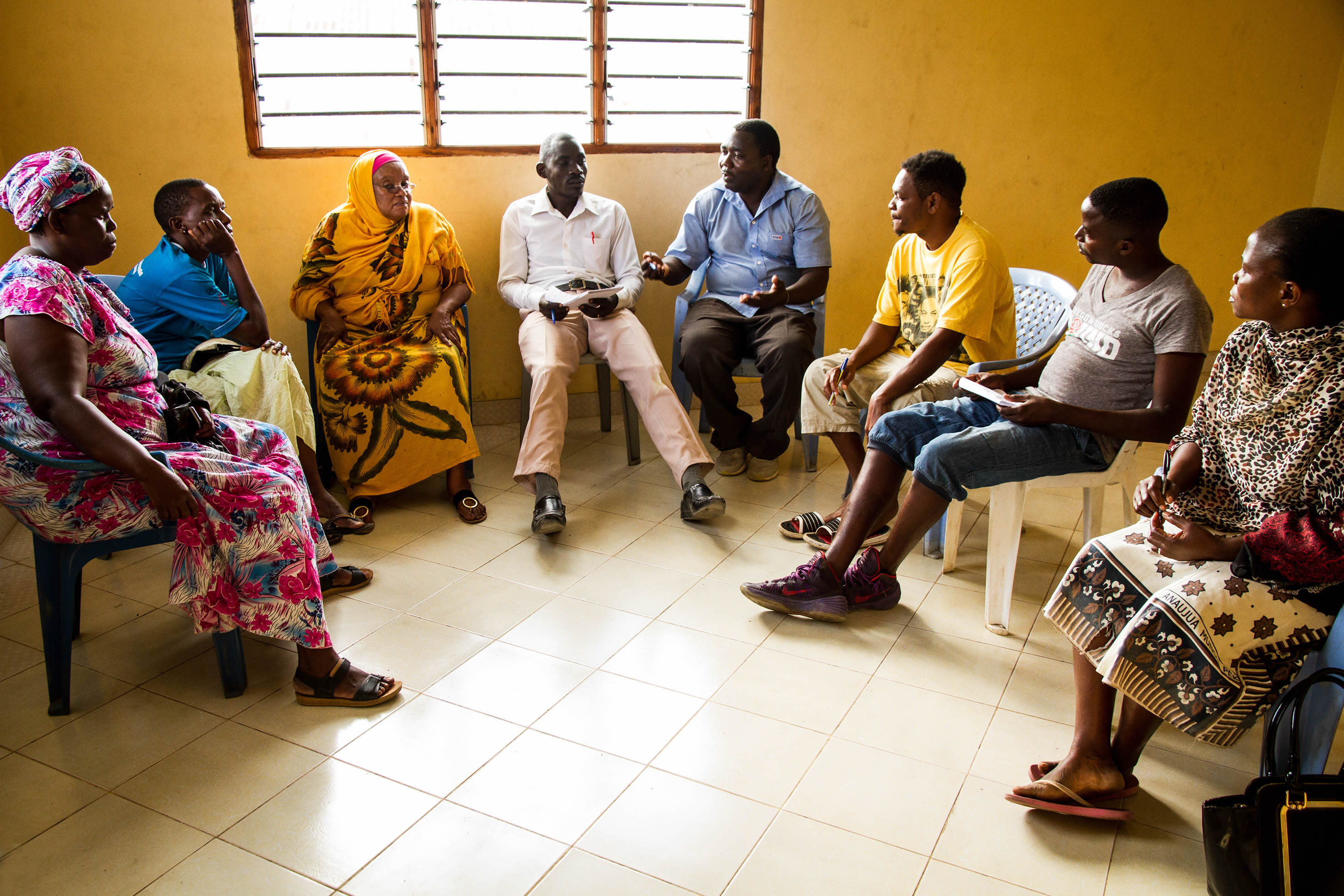 Amina Mohamed Omar lives in Majengo. She belongs to the garbage command and is a permanent member of Majengo’s Community Committee

Once a week, the 14 women and men, armed with wheelbarrows, rakes and garbage cans clean up the slum-village of Majengo 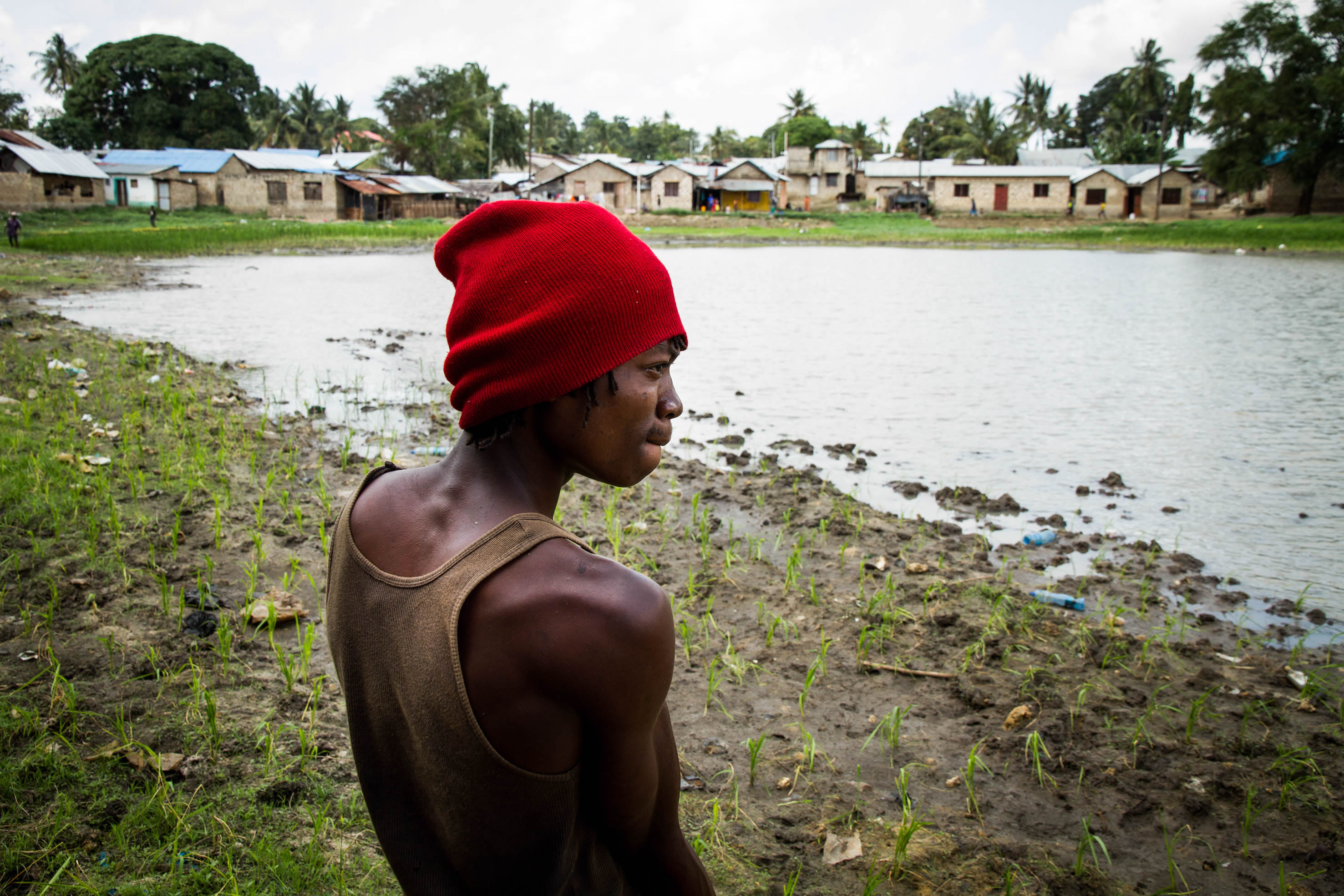 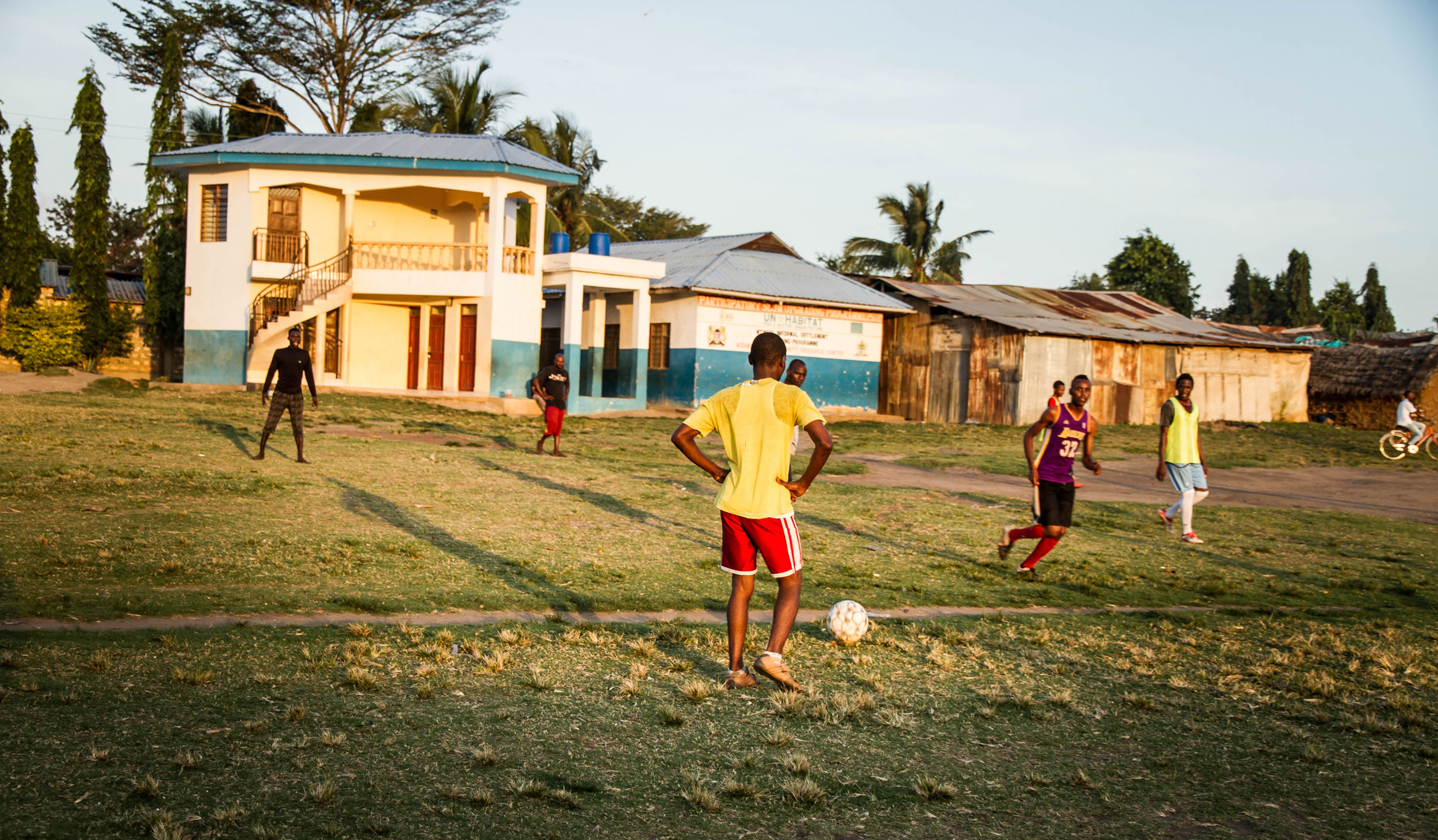 The people of Mzambarauni requested a computer room in the community centre. The villagers want to hold computer training there in the future

Majengo's garbage command is part of a slum rehabilitation pilot project implemented in 2014 by UN-Habitat in collaboration with its partners, the African, Caribbean and Pacific Group of States, the European Commission and the Government of Kenya. Majengo and Mzambarauni, two settlement areas on the outskirts of Mtwapa, are to be transformed from randomly grown, densely populated shanty towns that sprouted haphazardly to neighbourhoods that meet planning guidelines and requirements: modest estates in which every inhabitant will have access to clean drinking water, a toilet, with adequate roads and safe living spaces in future. UN-Habitat is primarily based on the principle of self-involvement. The inhabitants of both villages should not only have a say in how they want to live from now going forward but also participate substantially in developing their communities.

The newly built Majengo community centre houses Albert Njama’s office: a tiny room barely enough for his desk. He prefers to confine himself to the essentials rather than too much bureaucracy, Njama explains. On behalf of PSUP, he coordinates the initiatives of the local community, which usually take place out there in the village. "We have since created five so-called Community Managed Funds. These are PSUP-sponsored action groups that take on specific tasks in the settlement," he goes on to explain. In addition to two garbage crews, there is a brickyard whose specially trained workers hailing from the village burn bricks cheaply for the construction of more stable houses. Furthermore, widows and widowers came together and formed a group called “Mungu Pamoja Nasi" – God with us - which operates two water supply points that sell affordable drinking water to the residents. Of course, the local authorities first had to be connected to the “official” water supply by the government.

The rules are the same for all action groups. The local community provides the workforce and remains responsible for the long-term maintenance of the projects. UN-Habitat provides support in know-how, material, equipment or work wear. Helping people to help themselves so to speak, thereby assuring that the revenue from the sale of water flows back to the locals. "Our village urgently needed that," Albert Njama, the project coordinator says.

Hardly anyone knows the place better than he does. His parents were among the first to settle there more than half a century ago. Majengo, Njama’s birthplace, harbours vivid memories of his childhood. "Initially there were just a couple of mud huts. But with hopes of finding work in Mombasa, an ever-increasing number of people from the environs have moved here over the decades. The inhabitants fetched their relatives and friends. Where space permitted, a construction came up. Without designs, without planning. At some point, the influx of people got out of hand," Njama recounts. The conditions in Majengo have gotten worse and worse over time. During the rainy season the waters rose until the slum was submerged in water – since there is no drainage system. People threw their trash any and everywhere without batting an eyelid. Diseases were prevalent. "At night the narrow alleys were pitch dark since we have no street lighting. There was increased crime. It was simply a disaster and without the support, we would never have come out of the squalor on our own." 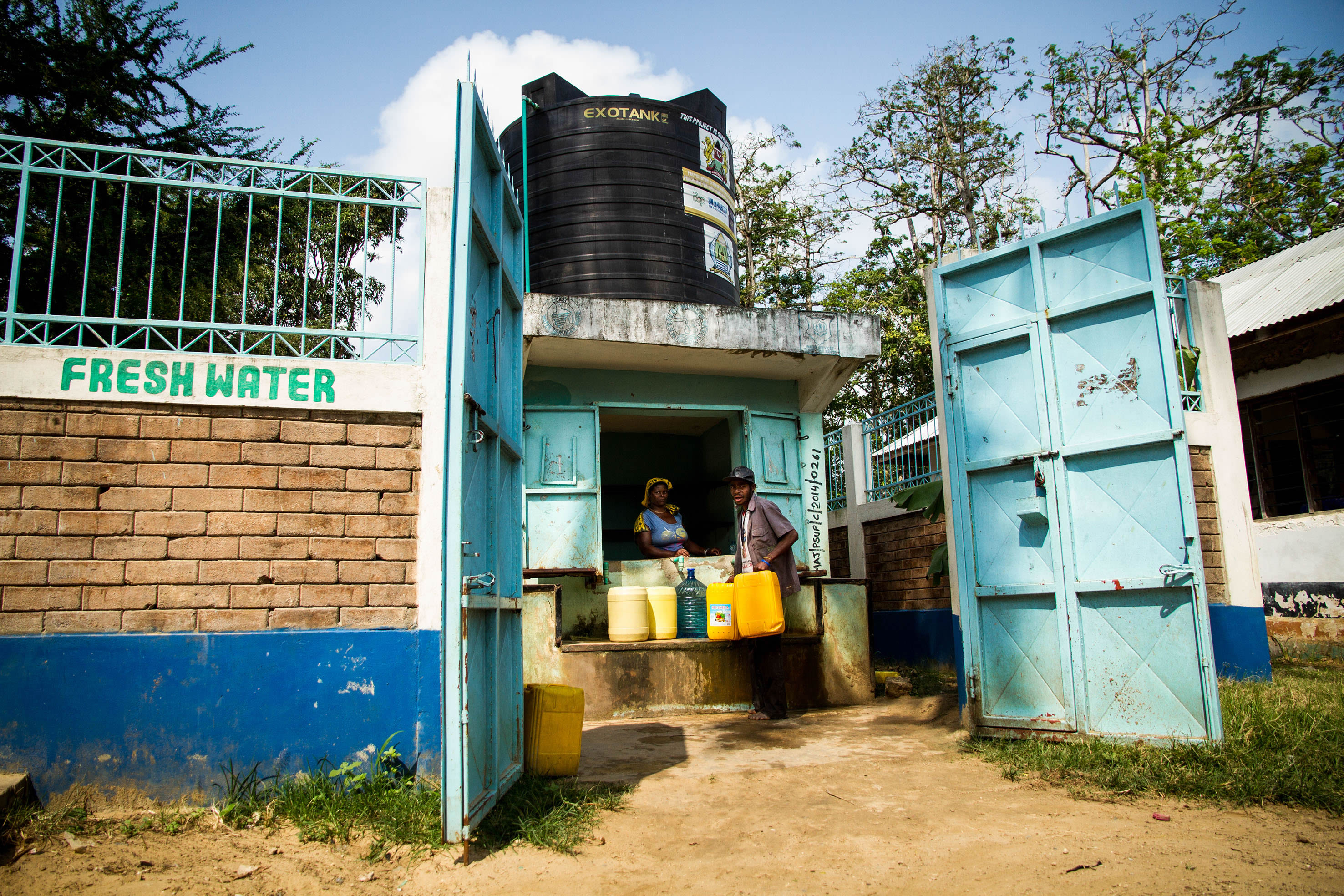 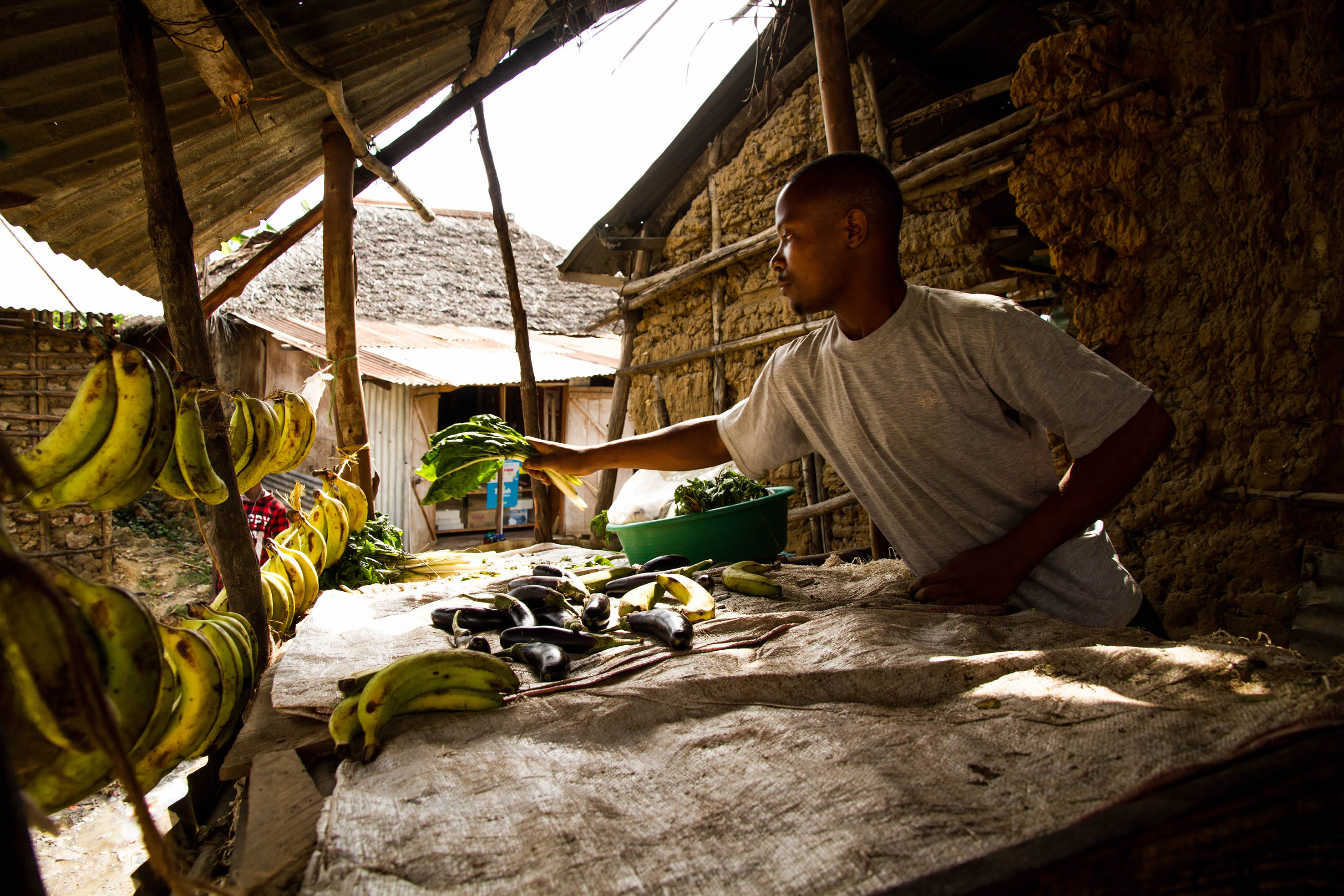 When the parents in Majengo are healthy, their children are healthy too

Majengo and Mzambarauni now have several water kiosks managed by the community. The people in the villages are able to buy drinking water at affordable prices 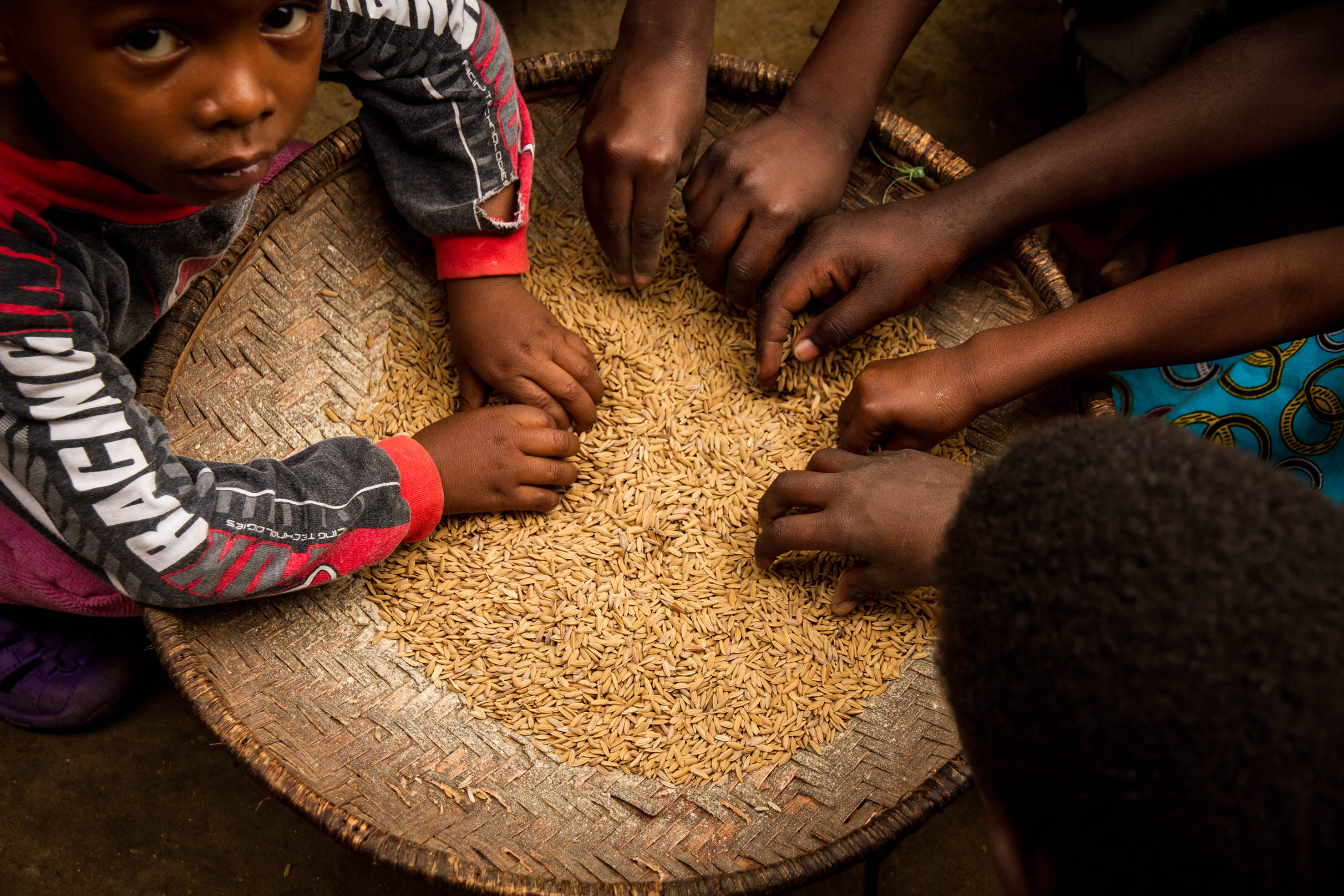 Rice is one of the staple foods in Kenya 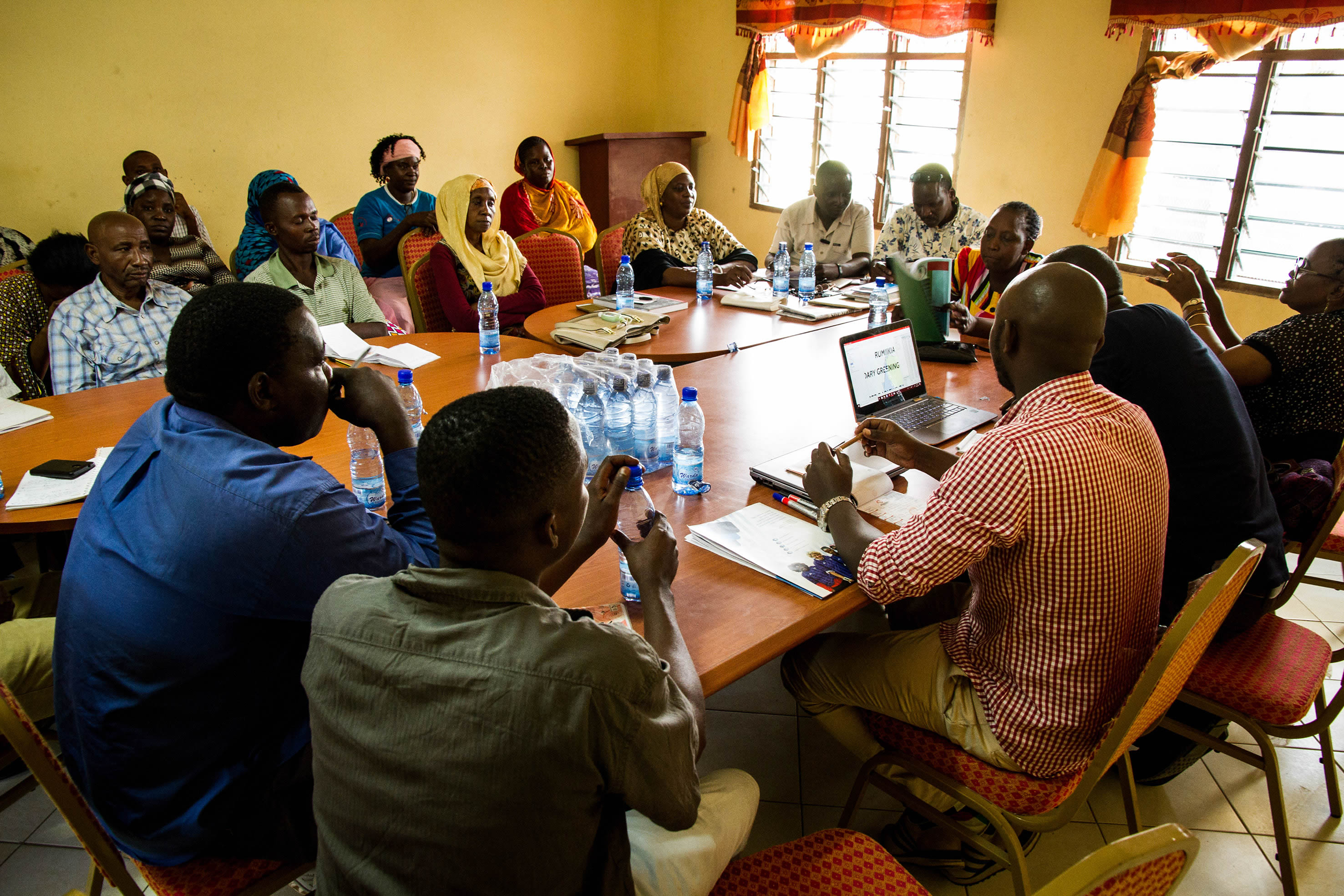 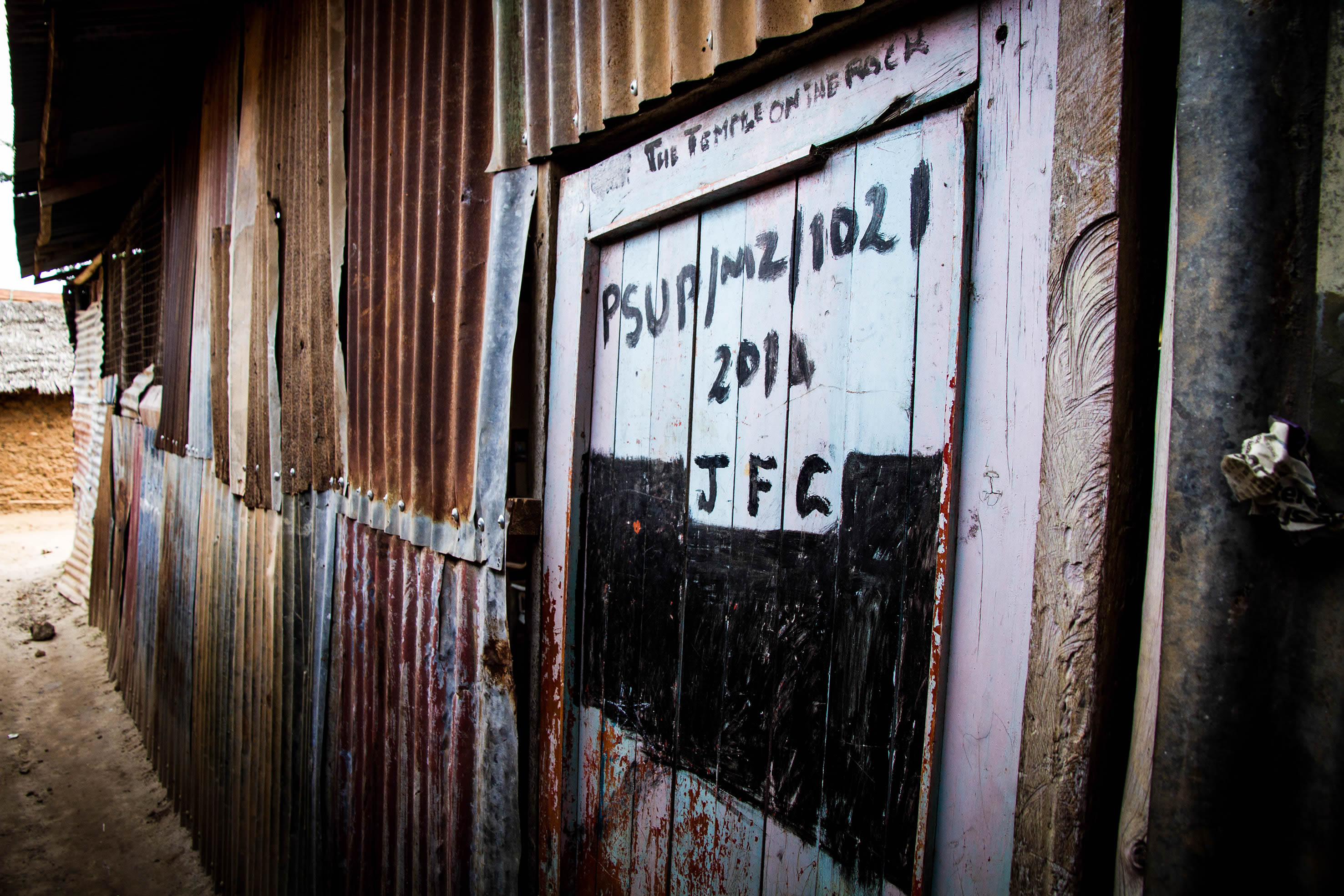 For successful upgrading, it is important to know the existing situation of the neighbourhood. All buildings in Majengo were numbered before the upgrading process started 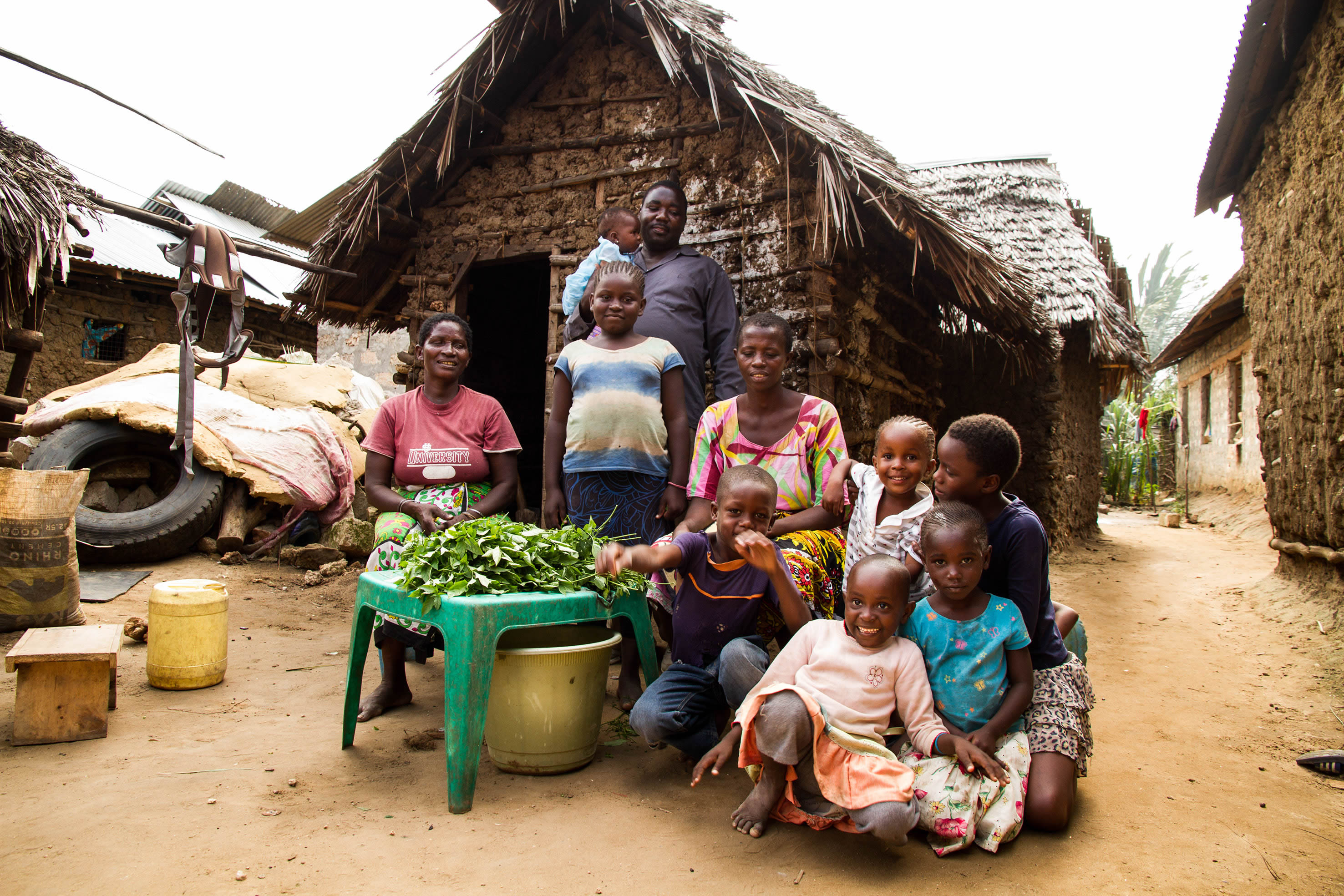 Karisa Kambi with his family in front of his house; all are residents of Mzambarauni The neighbouring settlement, Mzambarauni, needed the external spark just as much, as chaos threatened to take over. Today, with the support of PSUP, there is a community centre where the locals attend regular thematic workshops and trainings. There is even a computer room while there are plans to put up a library in the future. Mzambarauni has also set up local waste disposal units as part of the Community Managed Funds.

However, both villages are primarily pursuing the issue of title deeds. "We need roads that can be accessed by cars, ambulances or garbage trucks. We need street lighting, footpaths and sewers," Albert Njama states. Space needs to be created for that. And that is why together with the PSUP planning team and in close collaboration with the national and county governments, both communities had chosen to make commitments. For the access roads to be expanded, the plot sizes need to be reduced, or many a structure would even need to be brought down. As a trade-off, the Government of Kenya would commit to providing land title deeds to the people of Majengo and Mzambarauni. "That is a defining step for us all," Njama sums up. It is solely through the right of ownership that the inhabitants would be motivated enough to make a long-term investment. "After all, we can only really develop further if we know we are allowed to stay."